Thursday the 29th of March saw the official unveiling of our Broomhill Heritage Mural by local artist Jim Strachan, who has been working on the 59ft painting since last summer in the Tobacco Warehouse. 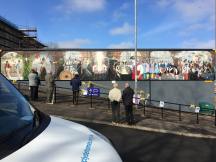 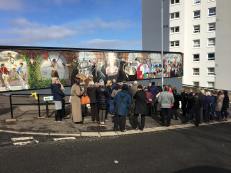 It was a fantastic event with local residents, school and nursery children in attendance as well as contributors to the researching of the history of Broomhill for Jim’s use in the painting process.  Provost Martin Brennan gave an inspiring speech on the importance of recording and representing our social histories for future generations, and Broomy Boy and Labour Councillor Colin Jackson had the job of cutting the ribbon and officially unveiling the mural. 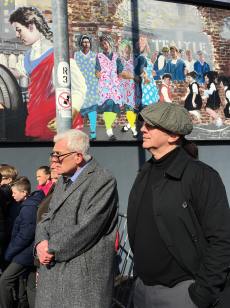 The mural’s main theme running through is the idea that it’s the people that make Broomhill.  The kids playing in the street, growing together creating their own games and making their own toys and the day that music filled the square, bringing all the generations and all walks of life together – showing true community spirit!

The shark plane represents the Blitz, and  gives a nod to how terrifying it must have felt to hear the hum of the engines overhead, and the Scots Guard signifies the people who fought in both WWI and WWII then came back home to work.  The passing of the hammer to the railway worker is one of the transitions back to civilian life – a very difficult thing for them to do.  The unfinished Broomhill war memorial depicted was paid for and made by the people.

The painter’s creating their own mural represent the rejuvenation of Broomhill and how the residents can create their own destiny and the archways signify memories for Broomhill’s history.

This was such a great day having different generations together sharing a moment for their community, and celebrating a beautiful artwork that will hopefully last for many generations more.