Sculptor Alan Potter has joined us during October week to create clay sculptures which can then be developed into stone carvings for contemporary benches.

The class began with a discussion about the heritage of the Broomhill area, and what imagery locals might like to see on public art works in the area.  Participants looked at the shipbuilding industry – as well as crafts that came along with that, for example, sailmaking – sugar refinery, fishing, the Merino wool mill, and farming.  As well as looking at the research into local industries, Alan showed participants paintings and sketches by Sir Stanley Spencer, who is famed for his images of the shipbuilding in Port Glasgow.  Alan encouraged participants to think about what they would like to design for the local area.

We had five 11 year olds come along to the class, and who were eager to get stuck in with the clay!  Alan had them study images of the Merino sheep and learn about their significance to the area, then begin to interpret their images into clay.  It was fantastic seeing how each child took the image of the same sheep and interpreted it into clay differently.

On the other side of the room the adults began by sketching out their ideas for designs.  Helen decided to look at the image of the Drumfrochar Road flats, with the unusual architectural details such as the bell top towers, and rope coiled around sections.  Barbie looked at the shipbuilding industry and made clay ropes coil round bollards at each end of what might become a bench, while Carol was interested in the area’s connection to sugar refining, and began to make bags of sugar for each end of a bench.  Jim had a more abstract idea for his bench – two heads at either end facing one another, one male and one female.  This is coming from the idea that women working in the mills would be walking up the hill to work, and the men working in the ship yards would be passing the ladies to go down the hill to work. 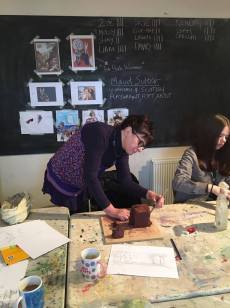 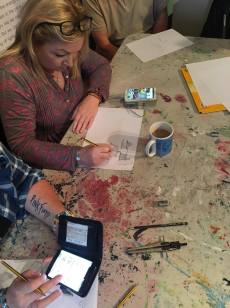 We cannot wait to see how participants progress in their skills and ideas throughout the week!
These workshops are free and are taking place each day from the 16th to the 20th of October, 12pm – 3pm each day in the Broomhill Art Flat (to gain entry, press number “12” on the keypad to be buzzed into Broomhill Court), 12 Broomhill Court, Ann Street, Greenock, PA15 4ET
All ages are welcome, under 12s should be accompanied by an adult.
Please email info@rigarts.org or call 01475 649359 to book (spaces are limited).