Tuesday afternoon’s Experimental Photography workshop was mainly a day of reviewing what the participants had done over the last few weeks, with the view to revising a subject that they felt they wanted to look further into.

On the back of last weeks portraits with studio lighting, the group decided they would try out taking some portraits of one another with the natural lighting available to them in the Art Flat. They were then given the task of trying to pick out from all the digital files, who’s images were who’s! 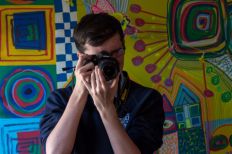 The younger members of the group had a few photographs left on their disposable cameras, so we decided to go out around Broomhill and finish off the films.  But first, we showed them some of the developed films from a few weeks ago, to inspire them on their outing and to show them what the film look like once it’s exposed.

Come along next Tuesday from 4pm to 6pm!

CLASSES ARE FREE AND SUITABLE FOR ALL AGES although those under 12 should be accompanied by an adult.
To book a space call 01475 649815 or email info@rigarts.org