Eric Webster, resident of Broomhill popped by to the RIG Arts office on Wednesday to have a chat about his time spent in The Broomy. He told us about being a pupil at the Mearn School, the kids who built huts on the scrap plots behind the old tenements, and the old railway lines that ran through the area.

Looking on to Lynedoch Street

I lived at 140 Lynedoch Street across from the Westburn Sugar Refinery from 1963 till November 1970 before moving to Mill Street, and remember the first residents to move from Lynedoch Street up to the 2nd of the high flats to be completed after Broomhill Court 1968. This was Prospecthill Court, finished in June 1970. The older tenements had been condemned due to poor conditions. These old tenements had outside toilets and I remember the outside toilet being shared with 3 other flats on the same landing. Most of us used a bucket for a toilet during night time much like the slopping out that happened in prisons a while back. So, people were very excited with the new high flats and walk-ups – lots of which were 2 bedroom – especially in comparison to the flats that we moved from only having a kitchen and a room which all 5 of us slept. In our case, we moved to a 3 bedroom flat with living room, kitchen, and bathroom. Everyone thought it was a God-send with the indoor toilet and baths and more electrical power points, central heating double glazed windows, storage space that the older tenement flats didn’t have.

Whilst the 3 high flats and walk ups were being built, the lock up car park behind the Broomhill Bar was used as the main a joiner’s workshop with table saws and band saws. They would cut all the skirting boards and fixtures and any wood work required for the high flats on-site. The door frames came ready built along with the metal framed windows which were all stored in the lock up car park till 1973 when all the building work was finished. One of last bits to be finished were the play park at Mill Street which used to be the George Wimpey site headquarters where the site manager was based along all with the other tradesmen in about a dozen huts all painted in the Wimpey bright yellow colour. The play park was completed in 1974 and was basic, with only a chute and monkey puzzle climbing frame, 5 concrete tunnels where were basically 5 sections of 5 feet in diameter pipes placed in an ‘L’ shape running down to the chute, and some square shaped concrete blocks which are the only bits left today with flower boxes on them now. 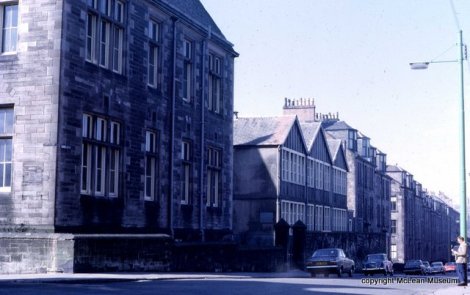 As a child, I went to the Mearns Street School, built in 1875, and we would have a wee carton of milk for our break. I enjoyed it there, it was a good school. During play-time, we would run down the big slope in the playground where there was a corrugated iron shed, near the railway line. We would go in there if it was raining, trying to keep dry. The school also had outside toilets with a steel railing type gate and no outside door meaning they were freezing in the winter.  The annex attached to the school site was built in the 1930s. Worryingly, it had asbestos sheeting on the outside walls!  The heating for the school was from coal fired boilers which heated the water for cast iron radiators. The school closed in in 1973 and Eric moved up to Overton Primary which is now Whinhill Primary. A lot of the old schools have been in the area since 1870s.

Some of the older children would walk along the old railway lines, although I don’t remember doing it – it was too dirty and a lot of the time the police were watching you as it was trespassing. However, the short-cut up Strone Farm housing estate, and to the swimming baths was too tempting for the older ones. If they took the normal above ground path, they would have been zig-zagging their way up Broomhill, along all the roads. Instead, they would pass under Drumfrochar Road and come up at Brachleson Street.

Walking along the Puggy Line, you would come off at Port Glasgow up by Upper Greenock station, behind the Tate and Lyle factory. They were dark tunnels, up to a quarter of a mile long – you could actually walk along the Princes Pier Lie to Octavia Park. The trains on the Puggy Line would deliver coal and supplies to the mills and factories, and would take the products back down. The Princes Pier Line would take goods to the pier head for the steamers. The railway lines really came into their own during WWII as  just up from the station was a marshalling yard at Princes Pier off Newton Street. The trains would take ships in where they would be lifted off at the yard. Most of the stuff for the D-Day landings was taken across there. Eric notes that the rail line companies were all fighting with each other and some of the lines were dead ducks before they even started.

Looking up Ann St to the high flats. – Eric Webster

Bruno’s fish and chip shop in the Broomy. – Eric Webster

Another important aspect of Broomhill’s industrial heritage is the Waterworks which would channel the water to the various mills and factories to be used for power. One of my old pals, George Robertson worked on the local water board. He used to operate the filter-station, working on the Hill Squad, having to break the ice to keep the water flowing to the mills. 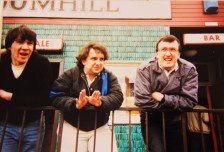 Eric now stays at a maisonette on No. 1 Mill Street, meaning he is still very a much a part of the Broomhill community.