Over the last two Hidden Project sessions at the Broomhill Art Flat, we have been experimenting with stop-motion animation.

Stop-motion animation works by taking still pictures, moving an object a small amount in each frame. When all these frames are stitched together in chronological order, they form a moving image, sort of like a flip-book animation.

In the first week we used ourselves as subjects, acting out imaginative stories within the flat. We explored a range of genres including comedy, horror and fantasy… The animations are yet to come, but once uploaded, you’ll see how creatively manipulating objects on a frame-by-frame basis can lead to some spooky and magical results. We used plasticine to make worms which looked as if they were wriggling in and out of people’s noses, and googly eyes which appeared like spots when someone scratched their face! 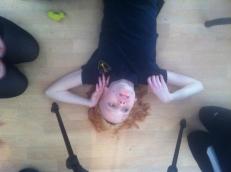 A plastic bottle was cut inch by inch. Each time it was made shorter, it was placed on the palm of an outstretched hand – the result was that it looked as if it was sinking into the hand, and finally disappeared!

The horror animations were also very effective, with the jerky nature of the finish enhancing the disconcerting feel. As the ghostly girls moved towards the camera, they took some pictures without no-one present in the frame, so it looked as if the figure was disappearing and reappearing, each time closer to the lens.

The week after, we created plasticine characters from drawn designs. We story-boarded ideas for our animations and used the same process as the week before. Now using smaller models as opposed to ourselves, it was interesting to see the creative effects of difference in scale, with the miniatures sitting upon human-scale tables with pens and pencils visible in the background. 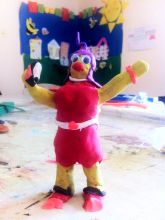 The animations will be uploaded soon so make sure you check back to see the final products!

One response to “Animate!”