At our kids art class on Wednesday 20th, we decided to make papier mâché igloos inspired by the igloo Chris and his daughter made last weekend.

We started by covering our balloons in white tissue paper and PVA glue. We made a lot of mess but the kids had loads of fun getting their fingers sticky and making strange sounds and they squeezed the air out of the balloons. 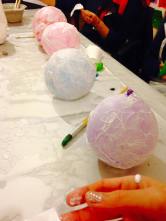 We then cut a polystyrene cup in half and followed the same method used to cover the balloons. This will form the entrance to the igloo.

Next week, we’ll pop the balloon and cut the circle in half, making the dome of the igloo. Then, all that’s left to do is glue-gun the dome and entrance together to make our completed igloo. We think they’ll look great with a small light underneath, creating a cosy glow to warm us up on winter days.

We’re hoping that our finished igloos will look something like this.

We wanted to encourage the kids to look at their surroundings and notice things that they might not see every day – either out of habit,or because they simply aren’t there all the time, like the igloo! The igloo Chris and his daughter built had a slight bump on the top, echoing the shape of the bell-towers on Drumfrochar Road. By using the igloo as inspiration, we were not only getting the kids to think about the weather and the landscape and creative ways to interact with it, but also encouraging them to think about the architecture of the place, and the small things that make a place familiar.

After we’d wound down and got everyone cleaning up, we took a seat and all the kids drew a picture. Some people have drawn their favourite part of Broomhill and the surrounding area, while others have drawn what they’d bring in if they were in charge. Others just took the chance to do some creative doodling. Whatever the kids drew, we were happy to stick them up on the wall and bring some more colour into the flat. 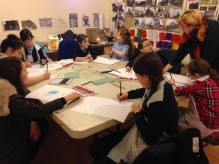 We’ll be on again next week from 3.30pm until 5.30pm on Wednesday at the Art Flat at 12 Broomhill Court, Ann Street.

One response to “Broomhill Igloo Tributes”